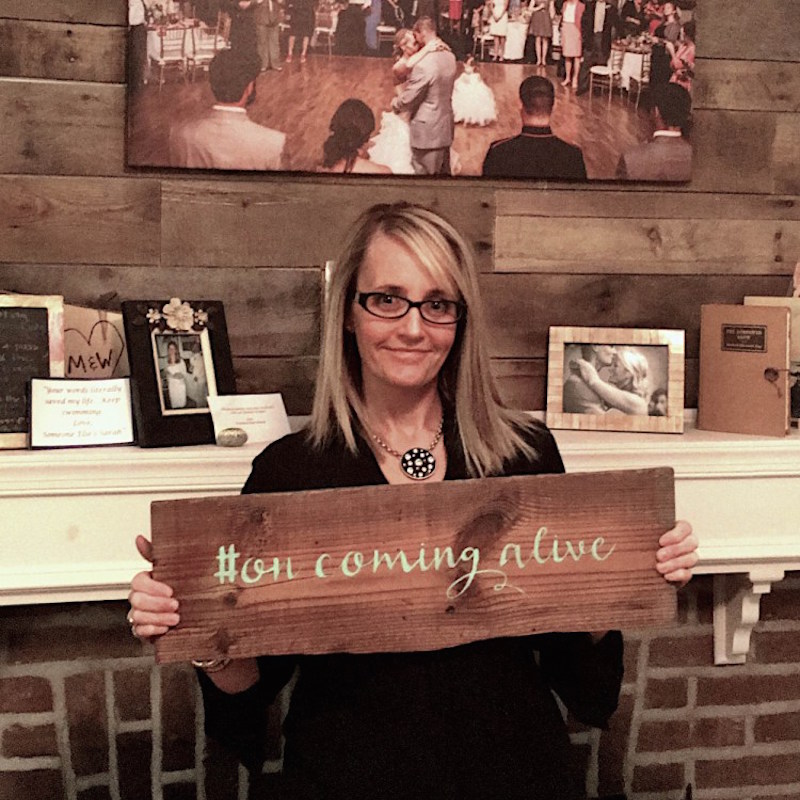 All You Need to do is This

My sister was a heroin addict.

While she wasn’t your stereotypical, stuff-of-crime-dramas, visibly strung out drug addict, her demons were real nonetheless, and they threatened to take her from us for a long time before they actually won.

Sarah was beautiful and strong and hilarious with one of the biggest hearts this world has ever known. She was a voracious reader who could usually be found with her nose in the latest Harry Potter book; she talked about Hermione and Ron as if they were her own family. Her laugh was so contagious she’d have everyone in the room in hysterics before they even knew what was funny. She’d almost lose control of her body when she laughed really hard; we rated people’s jokes based on how slumped over she was in her chair, and if there were tears in her eyes when she finally managed to sit up straight.

That’s what I miss the most.

In the last year and ten months, I’ve seen Sarah’s smile on ten thousand passing strangers, heard her laugh on the lips of countless others, and felt my breath catch in my throat every time when I realized it wasn’t her.

It will never be her again.

Because 673 days ago, while my then-fiancé and I were meeting with our wedding florist, deciding things like how many stems of succulents to put in my bouquet, my little sister killed herself.

Right away I realized they weren’t meeting my eyes, that they were looking anywhere but at me, that something was terribly wrong, that my world was about to be shattered as soon as they opened their mouths.

I stood there, still as stone.

They stared at the floor.

I stood there, and I waited.

I walked away, sat on my couch, tried to breathe.

“You’re kidding me, right? This is some kind of joke?”

It was April 1st, after all. The day of fools.

“She killed herself, Munchie. I’m so sorry.”

And in that moment, I knew there’d been a mistake. She would never take her own life.

And then, so quietly I could barely hear him say it, my best friend’s father told me that my little sister had taken a 20-gauge shotgun from behind my mom’s dresser, a gun I didn’t even know existed, and she had shot herself.

I calmly stood, walked through my house to the downstairs powder room, and I threw up.

And then I sat on the floor and debated locking myself in there until they left. Because maybe then it wouldn’t be real.

Maybe if I just stayed in that bathroom, she would be alive.

We went to my mom’s. I refused to go upstairs. Wes, my fiancé, showed up there with tears streaming down his face, I don’t remember the rest.

Four days later, I was standing in the receiving line at her funeral.

I stood there, feeling like a diver all of a sudden down too deep, sensing my bones slowly shattering inside my skin, trying to look anywhere but at the life sized portrait of her that was hanging above her casket, willing myself not to break into pieces right in front of everyone.

“Pretty terrible timing, isn’t it?” someone said to me that day, because my wedding was less than two weeks away, and I was standing at my sister’s funeral trying to remind myself to breathe instead of punching whoever said that in the face.

The day came and went. I never wanted to hear the phrase “she’s in a better place” ever again.

And then 13 days later, I found myself standing in front of our closest friends and family, marrying the one person who knows my true being like no one else on this earth. Every single thought, every single detail we had visualized in the months before that day, every piece of the puzzle magically fit together and our day was more perfect than either of us ever dreamed it could be.

But there we were.

And here we are.

The day after she died, I started writing. I posted something on my Facebook page, and I was brutally honest about her addiction. Within three days I had over 500 messages from people all over the world, sharing their stories with me, thanking me for my honesty, giving me the strength to put my feet on the ground just by sharing their souls with me.

In the following months, I found an army of love and support in a local organization called atTAcK addiction; I felt at home in the arms of people who had been right where I was, or where my sister used to be. My friends and family rallied around me and lifted me into their light instead of letting me wallow in my darkness. My husband found a way to sift through my rage and tears and near insanity and instead of running away, he held me close and helped me find my smile again.

Now, I’m able to look at things in a different light. And in retrospect, maybe I should thank my sister for the timing.

Let me explain. I would give anything in this world to go back to that day and stop her from pulling that trigger. I would do anything in my power to go back to that week and find a way to let her know that she was stronger than her disease, that she had 10,000 reasons left to fight, that she was so incredibly loved and admired by the same people she thought had every reason to hate her for who she was when the heroin took over. I wish with every ounce of my being that I could go back and tell her that I still believed in her, that the world she thought had been shattered could be pieced back together, that the person she was before her addiction was still in there, and I would help her find her again.

I would have given my own life to save hers.

But everyone keeps telling me not to think that way, and I’m trying my very hardest to take their advice. Every single day I have to find a way to convince myself that there was nothing I could have done or said to save her from herself. I can either spend the rest of my days fighting the “what ifs”, or I can make myself believe that what happened was inevitable, in a sense.

And now, I’ll be holding my breath for a couple of weeks or a month before the anniversary of her death. Maybe that time will dwindle as the years pass, but it will never go away.

This much I know for sure.

But then I’ll watch the flowers start blooming, Sarah’s smile covering the earth in the form of daffodils and magnolia trees and all the beautiful colors of spring. I’ll finally be able to exhale and celebrate the anniversary of one of the happiest days of my life – our wedding day.

You see, that’s what I do now.

I search the stars for silver linings.

It’s what I have to do now, in her absence, without her here to find them for me. It’s so my grief doesn’t swallow me whole.

I look to the sky, and I stare at the stars, and I see her eyes in place of them. And I find a silver lining to hold on to, and it is there that I find my breath again.

I take my husband’s hand, and it’s there that I find the strength to share her story with the world.

For the last year I’ve been writing blogs for White Sands Treatment Center in Florida, sharing every soul shattering detail of my journey on the other side of addiction, in the hopes that my sister’s struggle will bring strength to “someone else’s Sarah.” So far they’ve been read by over 60,000 people.

60,000 people have gotten a glimpse into my sister’s heart. And mine.

Every time I find myself getting discouraged, or thinking my words aren’t enough to save anyone, I get a message from someone telling me that my writing resonated with them, brought them comfort, gave them the strength to fight another day.

I keep all of those messages in a journal, and when I need a little reminder of why I need to keep putting one foot in front of the other, I flip open to a random page, and I read. Those words have helped me find my faith.

Faith in myself, faith in my marriage, faith in the fact that Sarah is still with me, every day, faith in the fact that I will find a way to wade through my grief and come out on the other side. Faith that her story is helping people, faith that there’s a reason why I keep pushing myself to dig deeper, to speak my truth more freely, to stand up for those who don’t have voices. Faith in the unknown; that one day I’ll be able to find my sister somewhere in the stars and I’ll make my home in her laugh once again.

Faith in the lessons I’ve learned, and faith in the fact that it is possible to find yourself, your true being, even in the throes of what seems to be an insurmountable grief.

Maybe it’s because you have to reach to the depths of your soul and draw on strength you never knew you had. Maybe it’s because you’re all of a sudden forced to spend your days questioning everything you thought to be true about your world, and coming up with different answers than what you once knew.

Maybe you just have no other option, because you’ve already lost who you were before.

Maybe you endure, simply because you have no other choice.

And sometimes, just sometimes, in the midst of the journey you never wanted to embark on in the first place, you find your purpose.

So to all of you out there feeling like you’re at the end of your rope, or that nothing good could possibly come out of whatever situation you’ve found yourself in:

In the words of Sarah’s favorite headmaster, Albus Dumbledore, “happiness can be found, even in the darkest of times, if one only remembers to turn on the light.”

All you need to do is this: hold on.

Munchie Morgan lives in Wilmington, Delaware with her husband Wes, their rescued pitbull Lola and their tortoise, Molly. In April 2014, she lost her sister Sarah to suicide after watching her battle a drug addiction for years; heroin being her ultimate downfall. Since then, Munchie has used her writing to spread awareness and help break down the stigma attached to addiction. Her hope is that by sharing her sister’s story, “someone else’s Sarah” will be able to gain the strength to fight another day. Find her on Facebook. 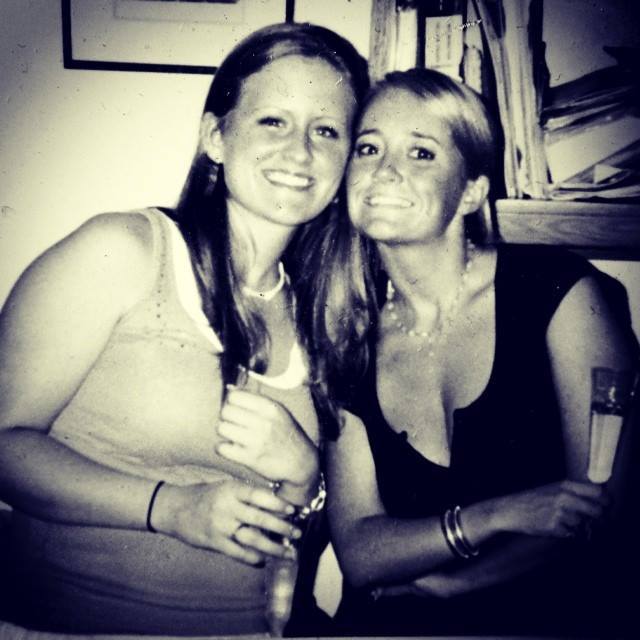 Previous ArticleTo Honor Him
Next ArticleGrowth Through Gratitude

Acknowledgement and the Possibility of Hope